The OnlyChild came through for me. She uploaded all the pics to Facebook and I shamelessly stole them so I could show you a few. So...here goes...

Lunch at the Lone Star Cafe. This is what the OnlyChild ordered (chicken fried chicken - we were curious): 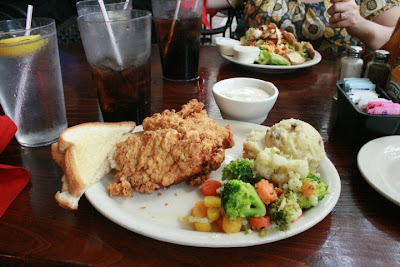 And this is what I ordered (and it was delicious): 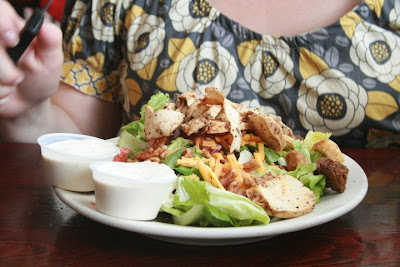 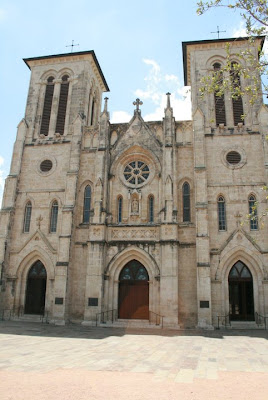 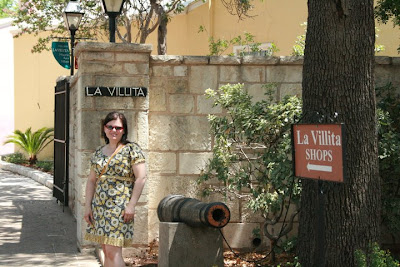 The conference wrap-up party was held at Sunset Station: 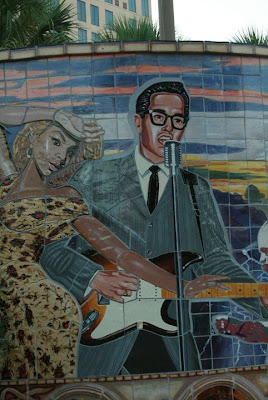 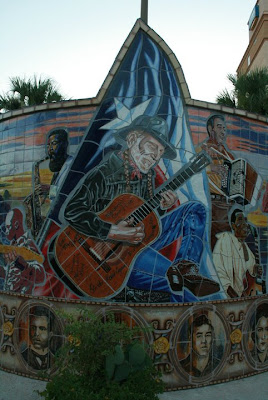 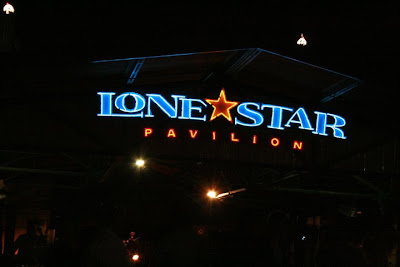 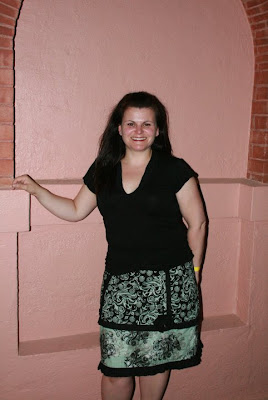 The next day we went to the Alamo. Very cool. 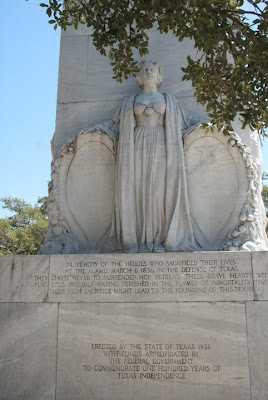 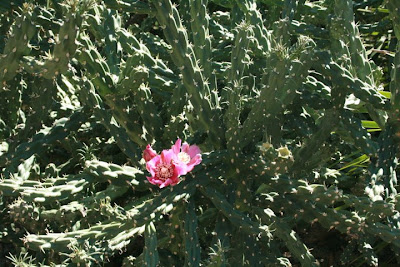 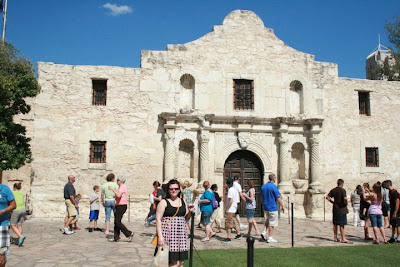 On Monday we headed up to Quarry Market to go cowboy boot shopping. We also spent some time at the University Co-op Store. The OnlyChild bought herself a monkey. 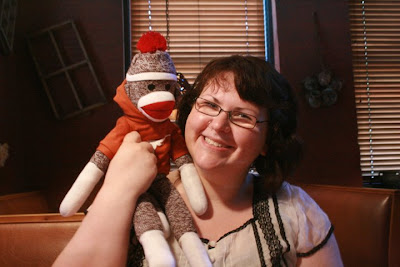 He wholeheartedly approved of these boots at Lucchese: 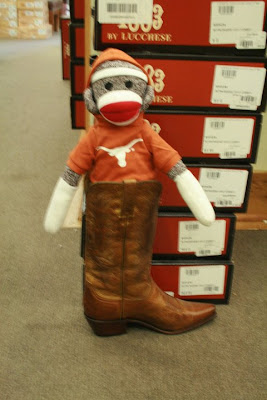 On Tuesday, we went to the Texas Buckhorn Museum. I already posted a few pictures from my cellphone so these are photos the OnlyChild took. Her camera battery died just as we got in the door so she also had to use her phone. 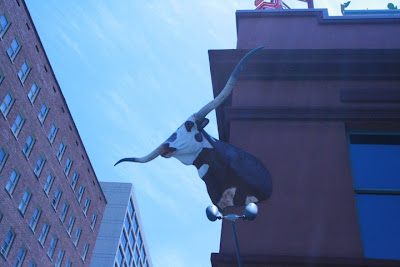 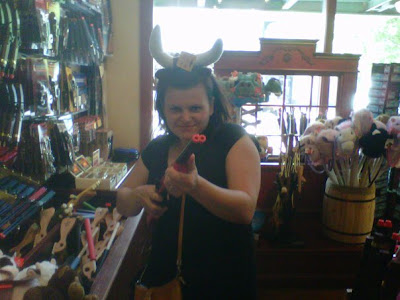 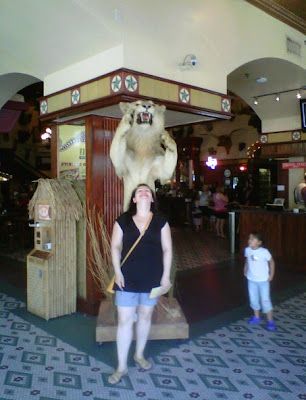 We left on Wednesday...after going to mass at St. Joseph's Church, doing a little shoe shopping (I bought some yellow shoes that were on sale!), and seeing the Alamo movie at the IMAX (which we really should have seen before going to the Alamo). 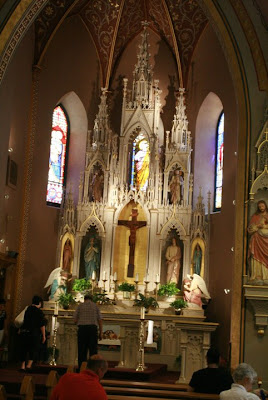 And then we headed to the airport...and you know the rest of that long and painful story.

So, there you have it. Our San Antonio adventure in a nutshell. It was fun. It was hot. It feels like it was months ago but I've only been home for three days. Crazy.
Written by Rachel 10 comments:

in one piece from my adventure in San Antonio.

It was a fun trip. The conference I attended was great and we had lots of time to see the sights. I don't have many photos, as my camera is on its last legs, but I will download the pics from the OnlyChild's camera (yeah, you've heard that story before...) and post a few later. For now, here are some from my cell phone... 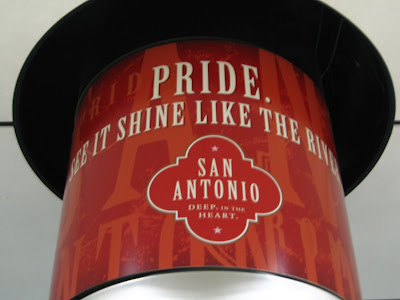 We arrived at the airport to find that United Airlines lost our luggage, or rather they didn't check it right through from Edmonton to San Antonio so our suitcases were stuck in Denver. They were delivered to the hotel at 2:45 in the morning. Only the first of UA's screw-ups on this trip! 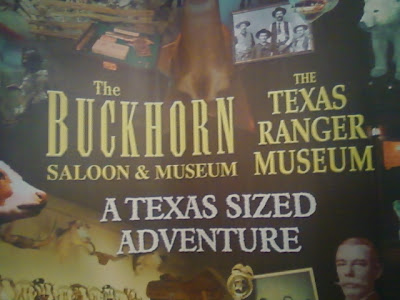 We went to the Texas Buckhorn Museum where we saw a vast array of dead animals, among other things. It was a really great way to spend a couple of hours. 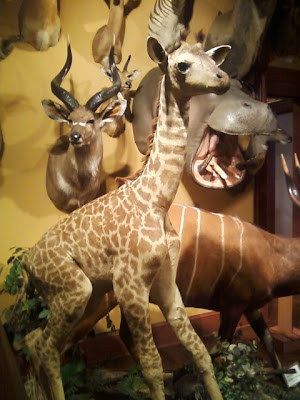 We also went on a riverboat tour. It was soooo hot down there. I like the heat, but the OnlyChild complained constantly about it. 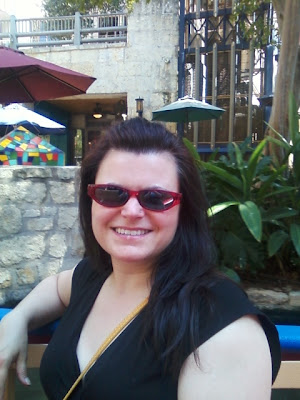 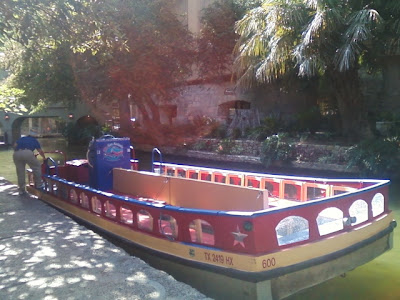 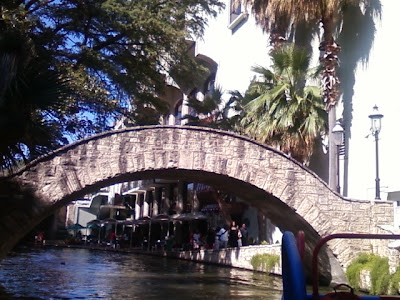 And we bought cowboy boots. I had no intention of buying boots (they are rather expensive), but as soon as I tried on a pair, I was in love. They had to come home with me.
I've already worn them. And, believe me, cowboy boots do not look out of place in Alberta! 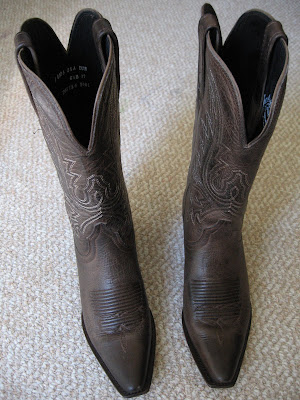 And we went to the Alamo, and to La Villita and Market Square. We walked along the Riverwalk numerous times. We swam in the indoor-outdoor pool (no photos of that!). We ate. I had disgusting Mexican food that made me sick. We drank copious amounts of tequila in the form of margaritas. It was a good time overall.
I also wanted to update you on the pain-in-the-butt dress I was making before I left. I finished it on the Monday night (we flew out on Wednesday) so that I could pack it. It turned out really nice...except I don't like the way it looks on me. It is quite unflattering around the belly area. I definitely need to be fixing that (the belly, not the dress) because I really let things go over the winter and it shows. Ugh.
Anyway, here's a quick photo of the dress hanging off the door. I still need to hem it and finish the sleeves (10-minute job), but I was so dismayed that I haven't bothered to do it yet. 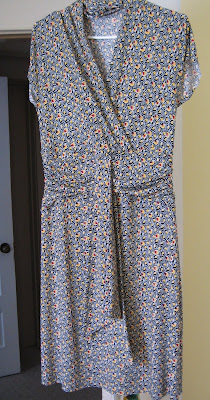 The OnlyChild took a couple of photos of me wearing my ruffled skirt so I'll be sure to show you when I get the SA pics from her camera (and cell phone). That is one garment that was a success!
So, yes, I returned in one piece from my trip...but only just. Our flight out of SA was delayed which meant we missed our connection in Denver which meant we had to stay overnight in Denver. In a hotel. Without luggage. And it was late. And we were not happy about the situation. So, the OnlyChild and I actually made United Airlines pay for separate rooms. We needed the peace and quiet. Not to mention, we had nothing but the clothes on our backs so had to sleep nakey. Not something you want to do with another person (who is not your spouse) in the room. I didn't even have undies to wear to bed because they had to be washed for the next day. Yikes - it was not a fun trip home.

But I'm home. And back to real life. Writing, studying, working. And, I hope, sewing soon!
Written by Rachel 7 comments:

That's right, you're not from Texas

But Texas wants you anyway.


I'm off to San Antonio, bright and early tomorrow morning.


The Riverwalk (both during the day and at night).


The Alamo. Perfect for a history teacher (even though I know next to nothing about US history).

Anything oversized.
The OnlyChild and I are going to tease our hair up high so we're closer to God. We're going to go cowboy-boot shopping. And we're going to take pictures of ourselves at anything where we can insert our heads (don't ask...).
Yeeeee- haw! (Do they say that in Texas?)
See y'all later!
Written by Rachel 12 comments:

I made myself a list for today - two tasks I had to finish for my course.

After they were completed, I could do whatever I chose to do.

I chose to cut out my dress.


But now I'm suffering from Failure to Launch. It's all cut out and ready to go...but I'm not ready to sew. I'm afraid I won't be skilled enough to make it, or that it won't fit me when it's done, or that I won't like it. Or worse...that I won't get it finished in time to pack it for San Antonio next week.

Or maybe the truth is that I was feeling a bit lazy and preferred to mess around in my sewing room, cleaning and rethreading my machine while watching an episode and a half of Pushing Daisies. Maybe.

After my tasks are complete tomorrow, I'll try again.
Written by Rachel 3 comments:

My next quilt project will be...drumroll please...

I've calculated that I will need 210 blocks to make a queen-sized quilt. Last night, I put together 30 blocks.

I like this layout.
And I think this is my favourite block.

A fun new project to work away at...in those times when I am sick of working on my new course and reading the huge 659-page textbook.
Written by Rachel 11 comments:

If you've been visiting with me for a while, you will probably remember that my sewing room - aka "the studio" - occupied this tiny little bedroom.


(picture from last August, right after I'd painted the trim and cleaned out the room - throwing out 2+ bags of useless stuff that had accumulated)
I have been very busy for the past week and have pretty much had the upstairs of the house upside down for days. But finally I can show you what I've been working on...
TA DA!
My *new* sewing room.
This used to be the spare bedroom - a place for infrequent visitors to stay. I tried to find a good "before" picture but I don't have one. Suffice it to say, the walls were RED (with one green wall), courtesy of a 12-year-old OnlyChild with kind of wild taste. I actually liked the red and green (raspberry and khaki?) but it was getting old.
This paint is Behr's Gold Buttercup (or Buttercup Gold?) in a satin finish. I used the paint-with-primer and gave it three good coats. It was a lot of work; in old houses there are many strange little corners. Those slanted walls are a bit of a challenge too!
I am very happy with the result. I also got myself a *new* dresser. I cut a deal with the OnlyChild - I gave her the cheap old dresser with mirror that was in the spare room in exchange for this equally cheap (from the same bedroom set) armoire that had lost its doors. Who needs doors? I painted it, added cute new drawer pulls and... voila!... a place to showcase quilts and fabric.
And the *old* sewing room?
It's now our new spare bedroom. We rarely have long-term guests and there's just enough room in here for the antique bed, a wicker chair and a small dresser.
The built-in bookshelves that formerly housed my sewing and quilting books now contain the OnlyChild's old books (and some from my childhood too).
My Postage Stamp and O'Cherries quilts work perfectly in here.
And we already have our first guest! My friend Kim is in the city for a few days marking exams for the government. She gave both of the new rooms a Thumbs Up.
﻿
Written by Rachel 18 comments:

Do you ever read through your old blog posts?

Sometimes I do...usually when I'm looking for something in particular. But last night I spent an hour and a half reading through my posts from last summer.

A year ago today I was on my way to Italy with thirty junior high students and four other adults.

We went to see the sights in Venice

Florence
Pompei
Sorrento
and Rome.
It was such a great trip!
But guess what?
Yep, that's right. I'm going back.
Spring Break 2012, I'm taking a group of students from my school on a tour. We were originally planning to go to England and France, but the kids talked me into Italy. Twisted my arm, you might say.
I can't wait.
England and France? Another time...definitely another time!
At Mont St-Michel, France, July 2010
Written by Rachel 5 comments: