I'm supposed to be finishing up a paper for my master's course - an article review which was to be completed with another student. My assigned partner, Andy, and I divided up the workload and each did our part. He was to email me his half and I would put it all together and send it back for his perusal before we post it for the rest of the class. He emailed me last night but I think he forgot to attach his document because there's nothing there.

So I'm kind of in limbo until he checks his email and discovers my panicked little message.

It's been that kind of weekend, though. A weekend of not getting things done when I intended. 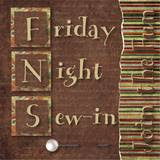 Ahhh... a night of sewing was just what I needed after the sadness of the past week. I had a few projects I could have been working on.
But then Mr. P invited me to go shirt-and-pants shopping with him﻿ because there was a big sale at the men's store. I didn't expect to be out until 9:30 at night so no sewing got done. (It was fun, though.)
Then yesterday, I spent the whole day with my friend, Kim. I used to teach with Kim years ago when we lived down south and she was the OnlyChild's grade two teacher. I love it when she comes to visit; she stays with her boyfriend so I don't often get to see her for an entire day. She brought her sewing machine and we were going to do some sewing but...
first we decided to go to Wal-Mart,
then I realized that I hadn't packed everything I needed to work on my quilt (so I pressed fabric and seams for her while she sewed),
then we went to the BIG mall to go boots- (for me) and clothes- (for her) shopping (she found lots of clothes; I didn't find any boots),
then we went to a movie.
I got home at 1:30 this morning!
I was up and showered and sitting at my computer with a cup of coffee by 9:00 am, ready to get that damn paper finished and... well, you know the rest of the story...
So... until I hear from Andy, I'm in limbo. I hope-hope-hope he checks his email right away. He's in Ontario and I have no other way of contacting him.
What to do until then...?
Well, I could read yesterday's newspaper because I didn't have time to read it yesterday. And I could read today's paper, too.
And...
I got a new issue of American Patchwork & Quilting magazine in the mail sometime this week, but someone hid in on me and I didn't even see it until this morning. 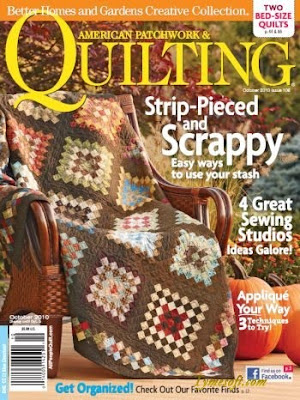 All is not lost.
But I still don't want to be up until midnight working on that paper. Hurry up, Andy.
Written by Rachel

My vote is for another cup of coffee along with that magazine - then, once perusal is done, I hope Andy has emailed you. Enjoy your day.

Sounds like even if you didn't get any sewing done, you still had fun. I am sure that paper was in the back of your mind the whole time....good luck with it!

gosh Andy, check your darn email. So sorry about that, I can imagine how you are feeling. So sorry about your loss as well, I don't think I've been to your blog to say sorry.

Hurry up, Andy!! I hope you finally heard back from him, Rachel.

Hate limbo!!! More so when waiting and something do....aaaahhhh!!
Good Luck!!

I hope Andy came through! Sounds like you're keeping busy. I love your new blog header -- a nice tribute to your beloved friend.

Which movie did you see? Good luck finding boots. Sounds like a fun weekend even if you didn't get your Friday night sewing in.

I think I am going to start setting aside a weekly knit in. If I don't make the time in advance, I never seem to get to it.

Hope you have heard from Andy by now and have a great week.

Hi Rachel,
Somedays are like that...been having a "different" week myself...
Rec'd your 2 ATC's ~ sweet little purse and the needlwork HWH may need to be framed! Thank You!
warmly,
deb :)