I used to teach English. I'm glad I don't anymore, not because I don't love literature; I do. I'm also a grammar freak. But the essays... oh those essays to mark. I mark plenty of essays as a Social Studies/History teacher, but somehow they're different. 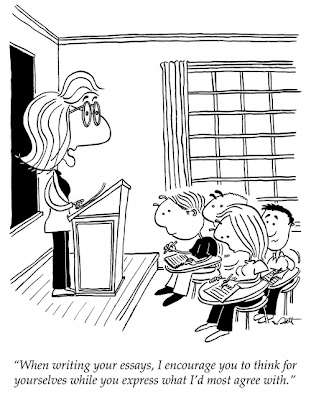 My department head sent me this email the other day. It gave me a laugh, and it made me think of Isabelle, so I hope she reads this:

Every year, English teachers from across the country can submit their collections of actual analogies and metaphors found in high school essays. These excerpts are published each year to the amusement of teachers across the country.

Another beautiful day here, with temperatures reaching 9 degrees celsius. That's about 48 degrees fahrenheit. Lovely for March. I even washed my car today; I had to because I could barely see out the windows. All the thawing and mud this week has made a real mess. But I'm not complaining. I love the sunshine!

When I got home from work this afternoon, I baked a batch of oatmeal-chocolate chip cookies for the OnlyChild to take to rehearsal tomorrow. She's a stage manager for the school play; she used to be on-stage, but then she gave it up. Too bad - she was a very good actress. I'm glad she's renewed her interest in theatre and is enjoying her 'job'.

I also did my housecleaning for the weekend (well, the downstairs anyway). I opened windows and let the air and sun in. I have a bit of marking to do, and lots of sewing, I hope. The weather is supposed to continue like this for a few more days - then snow on Monday. Ugh.

Got any good plans for the weekend?
Written by Rachel

I hope to finish (or at least get near to completion) my Downey Quilt for Kids' quilt....and I also am committed to doing another Saturday of "working interviews" with the applicants for the music directorship in our church....so I'll do that with the folk group and the bell choir and then on Sunday morning, I am part of the crew who will prepare and serve the monthly breakfast our church has. SO...busy weekend for me...that's for sure. I LOVE the excerpts from the students' essays!!! What a HOOT!!!

You are getting in the Spring Mode....opening the windows....the fresh air....

Here the air is humid and stiffling hot, I would love a little spring air...but oh well...can't always have what we want...now can we???

Good luck with your sewing.

Very Good Rachel! I especially love 5 and 6 -- too funny! And Oh! The six degrees the other day was YOUR six degrees, not ours -- now I see why you thought it was so wonderful. I couldn't figure out why you were so excited about 6 degrees F LOL! Have a good weekend!

These are so funny! The American tradition of fathers chasing their kids around with power tools? And algebra as love. But I love #3 has to be my favorite. So funny!

LOL - this made me smile. I sent your post to my DD who will be spending the next couple of months perfecting her essay skills ready to write her GCSEs...I'm sure she will find it amusing!

I was laughing out loud at these. Too funny!

my "word verification" word is friogyn. That is a doctor who specializes in women's medicine and has a heart like water that has spent the night in a Spanish freezer.

(yes, I have the capability of shortening an English teacher's life, if I so choose.)

Those are funny. I like number 20 the best, but 17 and 18 cracked me up, too. Thanks for starting my day with a smile.

No big weekend plans, but I'm thinking about getting a massage.

Ah, thanks for thinking of me!

I'm about to go and rake up yet more of last autumn's leaves. The sun's shining, kind of.

Too many favorites here- but #10 and #17 top the list!!LOL I forwarded your link to a friend who is a college English prof - she will enjoy this!!!

We are having beautiful weather today...I love it...It is 48 degrees and the sun is shining. Even went for a walk these last two days.

I have been cutting and cutting with a wee bit of sewing today.
I do have 3 charity tops ready to quilt.
Happy you have some sunshine and warmer temps to enjoy.
Just staying in here out of the cold wind.
Now I HAVE to pass this on to my teachers!!!
So cute!
Lola

the analogies are really funny......