On a wild monkey chase

Oh, I had such plans for sewing this weekend, but my time last night and this morning was taken up by a wild monkey chase. I was looking for some of these 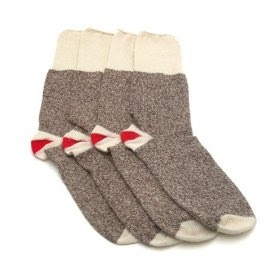 These are the original Rockford Red Heel socks made by the Fox River Company. They do not sell these socks ANYWHERE near where I live.
Mr. P and I drove all over the city. We went to Army & Navy, The Bay, Zellers, Sears, Winners, Walmart, Mark's Work Wearhouse as well as a couple of jobsite supply stores. No Red Heel socks to be found. Sigh.
I really wanted to make a couple of Sock Monkey shirts from Angela's tutorial (found here) for my friend Kim's girls. I finally managed to order some online (and got 50% off by searching on Google for a promotion code for the company - brainwave!) but you know my trials and tribulations with Canada Post. Who knows if the parcel will arrive in time for me to make the shirts as Christmas presents? I'm researching other options too. Just in case.
In the meantime, I will do some other Christmas sewing. My friend Patt mentioned last weekend when we were Christmas craft sale-ing that she wanted an apron, and she specifically wanted one with a loop for a tea towel. I found the perfect pattern on Sew4Home and bought some fabric to make two. 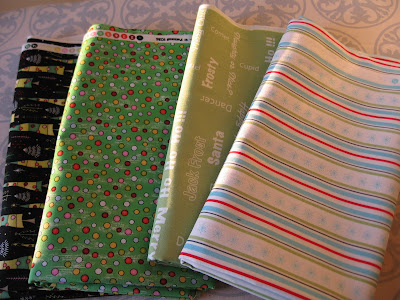 The colours are a little off in this strange twilight, but the two fabrics on the left go together and the two on the right also coordinate. The apron is lined, with a pocket and trim. I also bought twill tape for the tea towel loop, neck strap, and ties - black for one, white for the other. I'll decide later who gets the second apron. Maybe me?
Right now, though, there's a stack of grade 10 social studies essays calling my name.... I'd better stop monkeying around and get to work!
Written by Rachel

I'm in TX, but I just saw some at a quilt shop today - specifically for making sock monkeys. Have you tried your local sewing shops?

I was going to say the same thing as Missy. I saw them at my local quilt shop, too. I love that apron pattern!

Cute shirt pattern. I hope the socks arrive in time for you to get them done for Christmas. Please show the aprons when they are finished.

I hope your socks arrive too in time!
Deb :)

Those aprons are going to be fab! What a good idea to add the loop...I could do with that on all my aprons.!

So frustrating to not be able to get what you want, hope you find some soon.

Love the fabrics!! When do you leave?

Love sock monkeys my son and I took a class at Earthly Goods and they had some. Also Quiltessentials in St.Albert had some(the store move in the summer to a different location a bit bigger). Hope this helps.

Aprons are awesome gifts. I'm thinking of making some this yr, too.

poor monkey, can never monkey around, better get to marking

I did the same thing all day today and came up empty handed and feeling very discouraged.

Super cute! I hope your socks come in on time!

Oooh, those little sock monkey shirts are just too cute! I hope those socks get there in time!

They can be hard to find round here as well.
Both nice projects and will make wonderful gifts! Best wishes for all your Christmas sewing!!