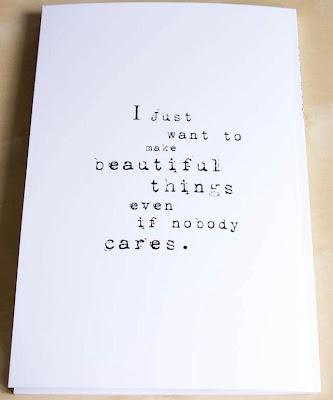 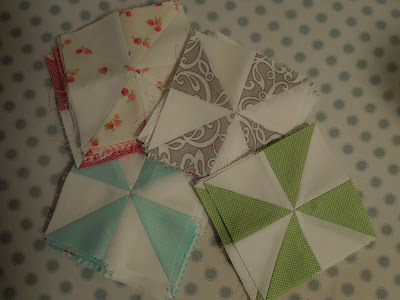 It's time to get back to the sewing machine, I think.
Written by Rachel

I am very sorry for your loss!

I am very sorry for your loss!

I missed your earlier post about Kat. I am so sorry.

But yes, I am compelled to create even if no-one else cares. I totally understand that.

Oh Rachael -- I SO know how you feel. I often wonder that -- what do we keep doing all of this for? And other people seem to have all this time for just relaxing -- like lazing around on a Saturday morning or taking long leisurely walks -- stuff I rarely do 'cause I feel so pressed to make stuff. Sometimes I wish it would go away -- life would be so much simpler. But, like you said...ultimately.

It's good to see you back!

Let me share something with you...I have two little pieces of needle work done by my great grandmother and my great great grandmother and they are so precious to me. If they had stopped to think that the time making those pieces was a waste of time I wouldn't have them nor would I feel as connect to them...every time I make a quilt I can't help but wonder what decendant will curl up with it and think about the grandma that made it with love. Personally I think that's a wonderful legacy to have. So don't stop creating and keep those beautiful things coming...it is what makes you special and the world a better place...

We each only have this one life to live. We are there for our loved ones. We have to work to live. We give so much of ourselves 'out' in so many ways! We each need to be able to do things for ourselves to nurture and feed whatever inner need we have. I sew, create and fluff my home.I enjoy these activities..they feed my soul but also bless my friends and family at the same time. I also use my hobbies to reach out and be of service to others be they human or animal.
You too touch so many lives in many wonderful ways. It is normal to feel these feeling when we lose someone. To question things. Hug OC as often as you can an enjoy life!

Hugs! I agree with everybody. I don't think it's time wasted. Onto the pinwheels... Oh I may have to follow suit. :)

When I look at the work done by my Great grandmother, I don't think one moment of that creation was wasted. As for me, that is the only thing I do during the day that stays done!

Hope you are feeling a little better this week, Rachel. It sounds like the funeral helped with the healing a bit.

I love that quote about making beautiful things-- thanks for sharing it. So true. I don't think handcrafts are ever a waste of time. There is something so special and perhaps even spiritual about a handmade gift. Even though I don't have any of my grandmother's knit blankets, the memories of those items help me feel connected to her when I knit.

Your pinwheels are lovely.

I'm so sorry for your loss!!

I often wonder about the usefulness of making things, especially for myself. I think that is why I enjoy making for others more. It's not so much about the actual finished product, but the relationship that comes from giving a little bit of yourself in the work that is given.