Some years ago, my mother sent me a snowman for my birthday (which is in January). For some reason, that set off a storm of snowmen and I continued to receive them as gifts as well as to make/buy them myself. I now have well over a hundred snowmen (and snowladies, I guess), all of which make their way onto every flat surface in the house during the Christmas season. 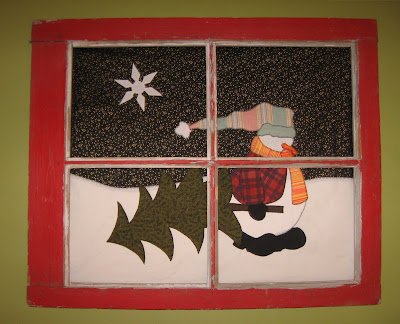 My friend, Kim, gave me this pattern a couple of weeks before Christmas last year. I had it made within a week. I had to adjust the pattern a bit because I wanted it to fit into this window frame, which came from our Prince Edward Island house. This hangs above the fireplace in our living room. 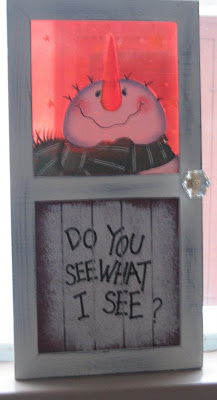 I picked this little cutie up from the fabric store, of all places, at 50% off after Christmas a few years ago. I have it sitting in the window of the stairwell so the light shines through the coloured glass. When the sun is shining, it's quite pretty. 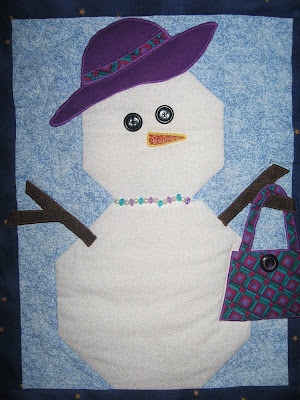 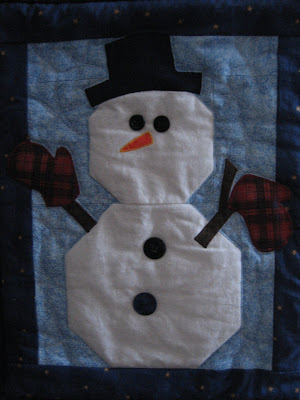 These snow couple wall hangings were actually 'prototypes' for the Snowman in the Woods quilt I keep saying I'm going to make (I have it cut out but still not sewn). 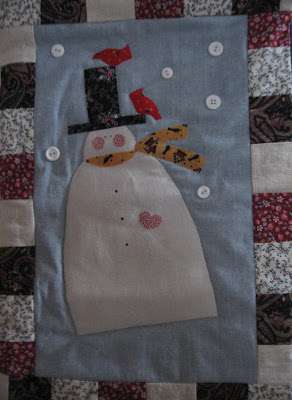 Before I knew anything about quilting, I made this primitive snowman wall hanging. The pieces are just fused on the background because the fusing was so stiff that I couldn't applique them down. Really, I didn't know better. 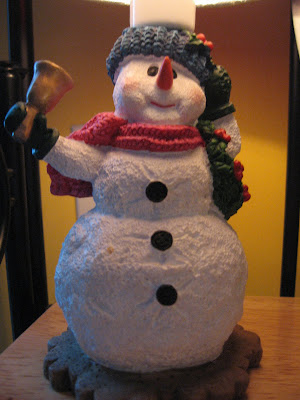 One of my students gave me this lamp about 8 or 9 years ago. I have it sitting on the baker's rack in the kitchen. 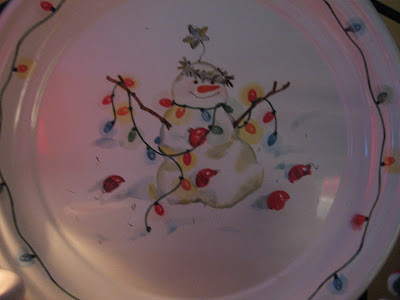 My mum gave me this cute little tray for Christmas one year. 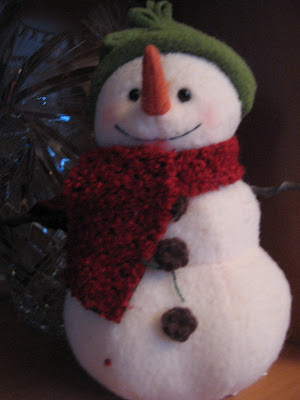 Another 50% off special after Christmas. I think his little face is so cute. He is sitting, with many of his snow friends, on one of the bookshelves in the dining room. 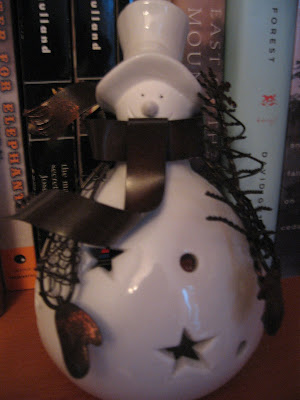 This is a tealight holder, but I never put a candle in it. Another one from Mum, and another cute little face.

I wish my camera took better photos. I'd like to have blurred out the background a bit so you could focus on the snowman. I wanted the OnlyChild to take the pictures for me because her camera is much fancier (and she knows how to use it), but after two weeks of asking, I just gave up and did it myself... as usual. 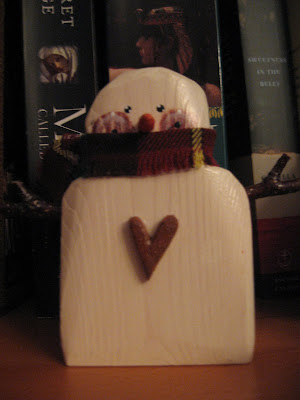 This is our Prince Edward Island snowman. He is made out of wood from the Island and wears a scarf from PEI tartan. His heart is formed from red PEI clay.
.
There are, of course, lots more to show you, but little time for me to take more photos and write more today. Such a busy weekend!
.
Yesterday I skipped out of work a little early (it's okay - the kids are done at 12:50 on Fridays) to attend a practice for the dance show in which I'm performing on Saturday. Then I came home and did my marking - yes, on a Friday night. What fun! I missed my staff party because I just feel so tired and needed the time to get other things done. But that's okay - with that crowd, it's just drinking and eating and silliness.
.
Tonight is Mr. P's work Christmas party; it's much more formal than my staff party would have been. I'm quite looking forward to this, mainly because I have a pretty new dress to wear. Nothing like a pretty new dress to make you feel like partying. It was an early Christmas present from Mr. P and the OnlyChild.
.
Tomorrow... dress rehearsal for the dance show, then the show itself in the evening. More marking in between. And my neighbours are having a get-together in the afternoon so we should make an appearance.
.
FIVE more school days until the Christmas break. I can hardly wait!
Written by Rachel

I love your snow folks....even the one that has such heavy fusing on him!!! Enjoy the party. Will we get to see a photo of you in the pretty new party dress? I hope so.

Cool, I collect them too!!
Have fun wearing your party dress & party the night away!

I love all your snowmen...I collect them as well....

I enjoyed your snowman collection. I want a collection of something (other than fabric) to display. It's good that you have something to look forward to (party) after all that marking. I, too, am counting the days until wintre break. It can't come soon enough for me this year.

Thanks for the snowman show. They are all very cute. Enjoy the party tonight!

Oh, going to a party are you? We want photos!!!

Love, love the snow people...You have some really pretty faced snowmen...and I really liked all of them.

Oh, wow...what a fun collection! I loved seeing some of them on your blog. This is such a fun and festive time of year.

Calling all bloggers I am having a huge giveaway on my blog and will be adding a new item everyday. Go check it out.

I love all of these snowmen!!!

Thanks for the peek at your snow people ... I particularly like the snow lady with the purse.

How was your dance performance? Did Mr. P or the OnlyChild capture it on video so you can post it?

What a fun collection of snowmen. I love them! Isn't it fun to bring it all out every year?