Hooray! I finished the Black and White in Paris quilt! Wanna see? Of course you do! 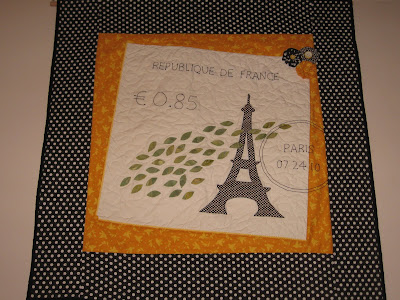 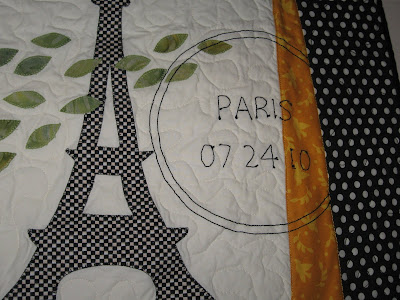 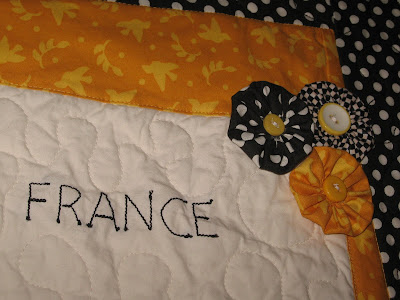 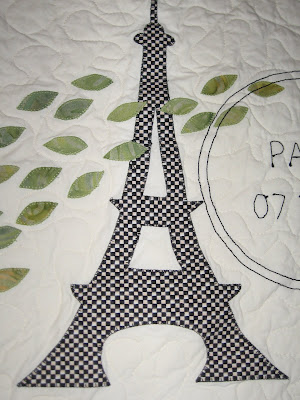 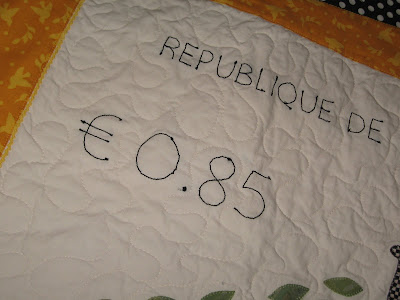 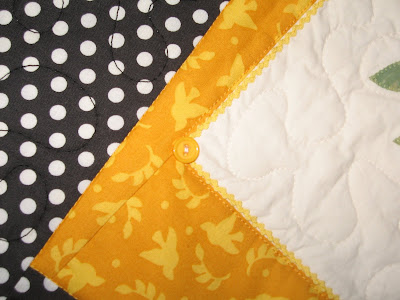 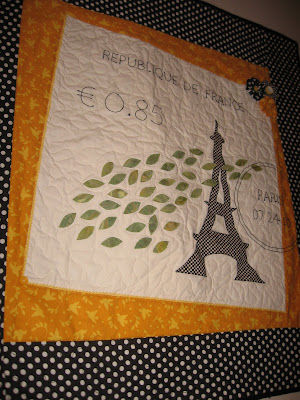 I love it! It's going to be very hard to give this one away. It's hanging in my entry way right now, where my Open Hearts quilt usually hangs, and it looks good there. So very good.
But, no. I made it for my friend, Sandi, who is my travelling partner this summer.
Can you see what it is? It's a stamp! €0.85 is the cost of sending a letter from France to Canada; 07 24 10 is the date we arrive in Paris; and of course there is the Eiffel Tower, the quintessential symbol of France!
I put the yellow baby ric-rac around two sides of the 'stamp' because that's all that was included in the package sent to me by Pat Sloan. I searched this city high and low for larger, off-white ric-rac, but it was nowhere to be found - not at the local fabric shop, not at Michael's, not even at Sprawl-Mart. My LQS doesn't sell trims at all. So, I had to make do.
And I used the circle cutter I bought on the weekend to make the yoyos. It's a fun little gadget and I have more plans for it in the near future. So, thumbs up on the circle cutter - a good purchase!
I'm so happy to have another finish for 2010. They've been small ones so far. Now... let's get that Tisket a Tasket finished. Finally.
Written by Rachel

What Comes Next? said...

I love the Paris quilt! I can see why you wouldn't want to give it away. Sandi is lucky, that is such a special, meaningful quilt.

I love it.....you did a fantastic job!!! Doesn't it make you excited to go now...even more than before?

What an amazing gift. It turned out beautifully.

You rock. It's great!

That is so cool!!! Nice job! I have a grand nice, Miss Hollyanne, who would love that!!
Lola

That is WONDERFUL, Rachel....your pal will absolutely LOVE it!!! (I'm assuming she doesn't read your blog and won't see it until you give it to her???)

J'adore! Makes me long for Paris!

WOW Rachel -- it's FANTASTIC! I LOVE it!!! I think you should make another one for you -- after all, you're traveling companions and you should both have a beautiful quilt to commemorate your trip!!!

You'll love Paris....buy some good walking shoes ( not sneakers or you'll stand out as americans)
and walk everywhere. Immerse yourselves into the Parisians and get a good feel for the place.
How wonderful for you and Sandi......a memory for a life time!

Happy Sewing....now make one for yourself so you'll have one too :0).
You'll love your Tisket a Taskit when you get it done...but the process is pretty nice too :0)

Are ya gonna do snowbound?

Bravo Rachel! That is awesome and I can see why you would hate to give it away. You are a good friend. :)

Well done Rachel. Maybe you should make one foe yourself too.

Love the stamp theme, how memorable. Your friend Sandi is lucky to receive it, uh, if it is not glued in your place, :-}
pokey

OMG! It is awesome!!!! I love it! It really will mean a lot to your friend, Sandi!

You did an awesome job on it...

Oh, that will definitely be hard to part with - how creative and beautiful!