Yesterday morning, I went to a "Jumpstart 2012" workshop designed to increase motivation and improve lives. It was okay...full of platitudes and clichés, but since I didn't have to pay for the ticket, I won't complain too much. It gave me something to think about at least. Afterwards, I headed to a nearby quilt shop for their "10 for 20" FQ sale. The pickins were kind of slim, but I managed to find a few yellow/black/grey/white fabrics to help round out my Dresden Plate selection as well as a Dresden ruler.

In the afternoon, I cut about a zillion blades and started to chain sew the tops. But I had to stop and get myself ready for date night with Mr. P. We went out to dinner to celebrate his birthday (which is tomorrow).

Today, after getting to the bottom of my marking pile (of course - it never ends), I got back to those blades and produced my very first ever Dresden Block. 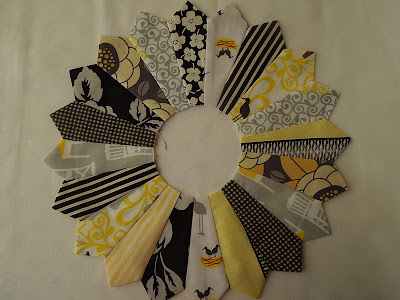 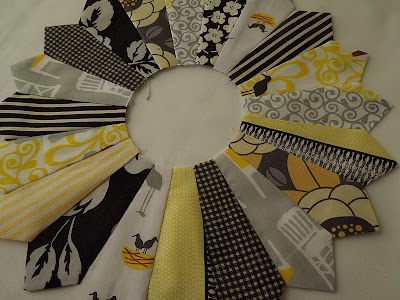 Of course, the block isn't completely finished; it still needs a circle in the centre and it has to be appliquéd onto a background fabric (not sure - white? grey?). This is a pretty time-consuming project. Not that I have an issue with time-consuming. I'm not in a hurry... I wonder how many of these I'd need for a whole quilt.

Every time I think of Dresden Blocks, I think of the beautiful city of Dresden in Germany that was pretty much destroyed by bombs during World War II. I wondered if the two Dresdens were connected...so I did some research and here's what I found (if you're not interested in the mini history lesson, scroll down past it and see what else I did this weekend).

The Dresden Plate quilt block - also known as Grandmother's Sunburst, Friendship Ring, Aster, Dahlia and Sunflower - was one of the most popular blocks of the early 20th century. The Dresden Plate reflects the romance of the Victorian Era with its love of elaborate decoration on household items and décor. Dresden, Germany was a center of the 19th century romanticism movement in art, one that included the fine decoration of porcelain. The plates were embellished with elaborate design using flowers, fruits and foliage. The beautiful plates would surely have been admired by women of the early 20th century. (Information found here.)

Okay, here's what else I did today. 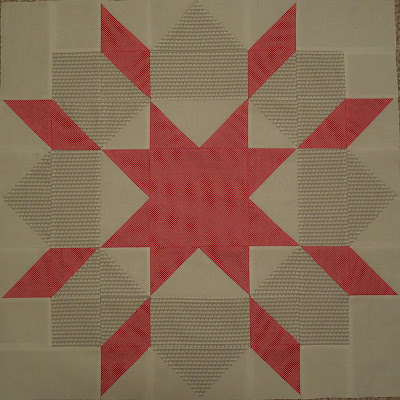 Never mind that I didn't do any housework this weekend, that Mr. P made himself pizza for supper, and that I wore pajamas all day (clean ones put on after I showered), I finished another block! I only wish I could stay home from work tomorrow and sew #6... But that's not going to happen.

Still, though, my motivation (and courage) is up and I'm determined to Swoon Along.

(Except not this coming weekend as I'm marking exams for the government. Bah.)
Written by Rachel

At least the marking will give you more money for fabric! :-)

I made one Dresden plate block and am not sure I could stick with it for a whole quilt full of them! Yours is wonderful with the color choices you made. I'll be anxious to see what color you use for the circle, too. Happy Birthday to your hubby!

oh, your blocks are both so pretty! the dresden is perfect in yellow and black and swoon....well, swoon is lovely!

I can't wait to see how you will finish the block. I've never done anything like a dresden before. I'm thinking a grey background would be pretty.

What an awesome day of sewing! Both of your blocks are gorgeous. Looks like you've got some good projects working along. I managed to do a little Sunday sewing too, but I was experimenting and didn't like the results. It's all good though, 'cause now I know the way forward!

Oooo. Love them both! The yellow/gray dresden is so fresh looking! I hope you continue and make more. even if it's just a wall hanging or something.

Love the yellow! Yellow is huge this year in fashion and home dec, so it is fun to see it in quilting, as well!

Your Dresdens are quite striking. Those Swoon blocks are coming along nicely. ann :-)

I love the fabrics in those Dresden plates. In Japan the tops are rounded and it is a chrysanthemum. Glad to see you are still swooning. Isn't it a bummer when work gets in the way of life?

love the color son your dresden! sweet on swoon!

your colors on your Dresden plates are just stunning!!

The Dresden Plate is amazing! Love the colors! Swoon is beautiful too. Sounds like you had a nice weekend :-) I hope you got to eat some pizza!

loving your swoon blocks. and the dresden is fabulous!