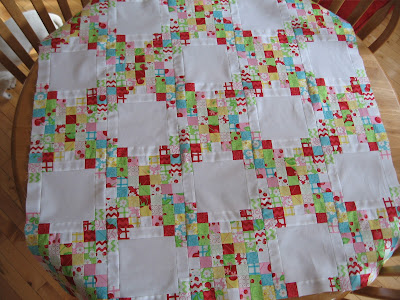 I've decided to name this little quilt O'Cherries - not in honour of St. Patrick's Day (it certainly won't be finished by then), but because it's an Irish Chain made with Oh Cherry Oh. 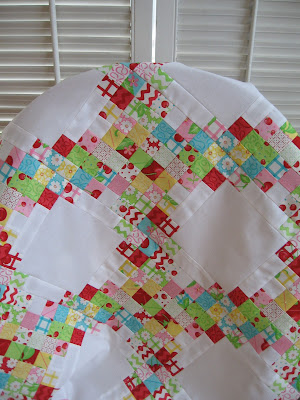 The finished size is supposed to be 45" x 45". I'm trying to decide on borders. I don't have enough of the Kona White left to make the 5" borders suggested in the pattern. I could make 2" white borders then finish them off with a sort of picket fence border made from the leftover pieces of the honey bun (there might be enough).
I also have some beautiful Kona red that matches nearly perfectly. 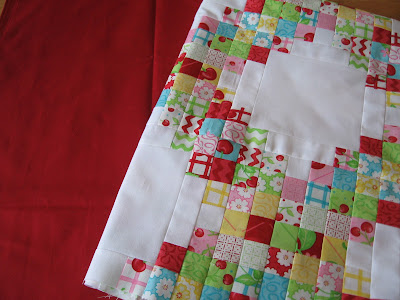 It's a possibility for the binding, but probably would be a bit too much for a border.
Hmmmm...decisions, decisions. I have a few days to think about it since I probably won't have much time to continue the sewing until the weekend.

In the meantime, let's enjoy some homemade chicken soup. 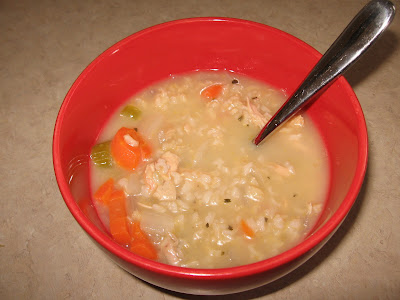 It occurred to me as I was making this last night that I should have been taking photos so I could post a how-to for you. It's easy, but takes quite a long time to make.
Next time we have roast chicken, I'll be sure to make it again and write up a recipe tutorial. It is delicious!
Come over to Fabric Tuesday. I linked...you should too! 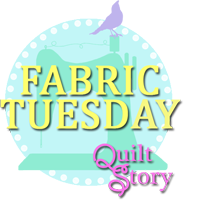 I just LOVE this quilt and I have a Honey Bun waiting to be makde into something. Now I know what it's been waiting for. Thanks for the inspiration!

I love your quilt...it really does say "spring" to me!

What Comes Next? said...

I just love how bright and cheery it is! The red is a good match, but I agree, probably a little too strong for a border.
That chickie soup looks good!

Hmmmmm....pretty quilt and yummy-looking soup! Good combo on this post!!! I love the name of your quilt, too.

Your quilt is so wonderful, nice and fresh, fun...and springy!!

Do you need my address so that O'Cherries can come live at my house???? :)

O'its so beautiful! O'I love the idea of the picket fence border! O'you must keep us posted on your progress :o)

It's looking HOT Rachel! WAY hotter than mine LOL!

That quilt is amazing!!!! I am very impressed, love it. Thanks for linking to Fabric Tuesday!

I absolutely Love, love,love that quilt!! So pretty.
The soup looks awfully good, too!