Just over six years ago, Mr. P and I bought a house on Prince Edward Island. He was born and grew up there, and we always planned on retiring "back home". We found this old farmhouse, built in 1929, on 5 1/2 acres of land in the Eastern end of the Island and fell in love with it. It's surrounded by red dirt and potato fields, and the ocean is across the road. Our nearest neighbours rest quietly in the Catholic cemetery, so it's a peaceful setting. I loved puttering around the house, hanging laundry on the line, reading on the veranda (maybe you can see my chair tucked into the nook on the left side of the picture below), and receiving visitors. Over the years we have done some renovations to the property: removed carpeting, new paint, totally re-did the bathroom (except for the floor), rebuilt the veranda, and created a lawn out of a hayfield. 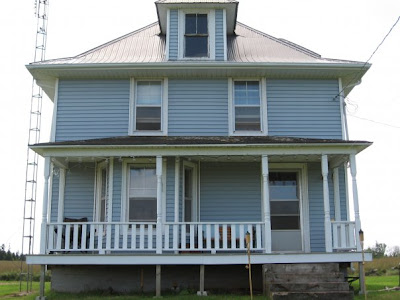 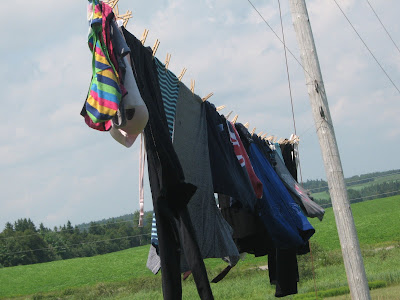 This morning, after I ate my oatmeal, I signed the papers to sell the house. It's breaking my heart. I had plans and dreams for this house, including a fabulous studio/sewing room in the attic.
_
But the place is a bit of a money pit. It's on the other side of the country from where we live so we don't get there every summer and it costs far too much to travel when we do. It's unbelievably expensive to heat in the winter so we haven't been heating it, and the effects are starting to show in the lathe and plaster walls. Plus, in the past it's caused some, um, disagreements between us because Mr. P's family lives on the Island and he always wants to drive around to visit them while I prefer not to spend all my vacation days sitting in his mother's living room watching daytime TV. Last but not least, Mr. P, who used to be a school principal, recently switched jobs and now doesn't get his summers off (he is already regretting that) so the prospects of us spending another whole summer at the house are pretty dim.
_
Goodbye sweet house. Goodbye future dreams. Goodbye ocean breezes.
_
Sigh. I know there's an upside to this somewhere and I will discover it, but for now I'm pretty bummed out. So much so that I haven't even felt like sewing for the past few days. Gasp!
_
Sigh again.
(no smiley face today)
Written by Rachel

There is a reason why things happen in our lives. We may not understand it right away, but there is always a touch of "good" even in a not so good situation. There will be a time in the future when you will say...I am so glad we did that back then.
Just remember all the good times and memories you've made there, because those will be yours for a lifetime!
Now I want to see a smiley face tomorrow,
~Karen~

Just remember, when one door closes, another opens.

I'm sorry to hear that Rachel. What a bummer. But you'll always have the memories.

One of these days I would love to visit Prince Edward Island. It's on my list.

Oh, so very sad -- I'm sorry to hear this for you. I've always wanted to visit PEI and definitely hope to one day -- it sounds like such a beautiful place!

I can identify...we had a summer place for over 20 years. It wasn't in as grand a setting as yours, but it held many happy memories of raising the girls there in the summer. (I was teaching then and was able to spend entire summers there with them.) We had summertime friends we treasured (and still have many of them to this day). When we realized we had many of the same "amenities" her where we retired, we realized it was senseless to keep the summer place...and we sold it. That was a very hard decision and tore at my heartstrings. That was nearly 4 years ago and I believe we made the right decision. If we were independently wealthy, we'd have kept it...but we aren't, so we didn't...and it was the right decision although there are still days I miss it. You will get beyond the big hurt you feel now.....but I hope it helps to know someone really understands. So....try to smile...because of the memories, okay?

I'm sorry you had to say good-bye to your lovely farmhouse. Reading your description of the red dirt, potato fields, and ocean across the road made me long to go there. It must be so hard saying good-bye to the house and those particular retirement plans, which sounds idyllic. Have you and Mr. P given any thought to whether you might still retire there?

Reading your description of Prince Edward Island reminded me how much I wanted to go there after I saw Anne of Green Gables about ten years ago. I think I need it to put it back on my list.

I know exactly what you are feeling - I felt the same way when I sold my little house in Florida...but, there is always a bright side - and it may not show itself right away - you will find it down the road.

Sorry to hear that your place in PEI is up for sale. Hopefully another exciting opportunity is around the corner for you...

I've always wanted to go to PEI since I was a little girl and read the "Anne" books; one day!

What a cool house. Dont be sad, there is a reason for everything. At least that's what people keep telling me. :-)

What a sad thing...but I agree with the others who commented that when one door closes another opens...the hard part is that sometimes it takes such a log time for the other one to open. I do hope you get to sewing soon, though.

So sorry to hear about your house. Good things will come from this. Things do happen for a reason.

Sometimes it is sad and heart breaking to have to let go of a dream, no matter the up side of it.
Hugs,
Lola

One goodbye equals a handful of hellos. You and your husband will be in my prayers. It's not easy what you're going through. Not easy where you've been.

I hope for you a basketful of contentment.

This is so heartbreaking...I just hope that it means you will be blessed with an even BETTER home later. I know that must be hard to imagine right not.

That makes me sad and I read in one of your later post that you sold it. We sold our dream home in Texas to come to American Samoa....what were we thinking? It is just material things....