Inside some of us is a thin person struggling to get out, but they can usually be sedated with a few pieces of chocolate cake. ~Author Unknown

Good morning, and welcome to another edition of LOOOOOOOSER MONDAY! Today's show is brought to you by the letter "C". Let's see... what words begin with "C"? How about CAKE, CHOCOLATE, CANDY, COOKIES... and CAN'T have it.

Nearly a week has passed since I last indulged in the sweet goodness of all those things listed above. I'm not really missing them... okay, just a little maybe. But I've been good. I've been very good. So why isn't the scale rewarding me? I was actually UP 0.5 lb this morning. Hmmmmph. Maybe I should go back to eating ice cream for dinner... No, I'll just keep on trying - as we used to say at WW, maybe it will show on the scale next week!

Some of you may have been wondering whatever happened to the Let it Snow quilt I was working on, with the pine tree blocks (or maybe you have lives and hadn't even given it a thought). Anyway, I had to put it away for a few days so I could work on costumes for Open House (including a shirt for a three-headed person, a hat that looks like a tire, and a shirt covered in medals - don't ask). Open House is tonight, so I finished all that work yesterday and, after, I put together a "test block" of one of the appliqued skiers. 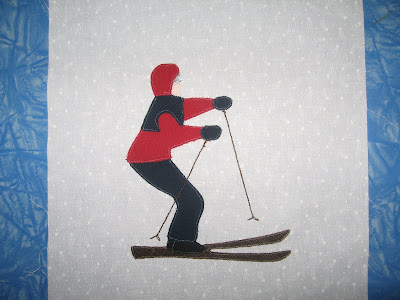 I used fusible web and then a tiny little straight stitch to secure all those little pieces. I also used invisible thread and I'm not sure if I like it. It's not as, um, invisible as I'd hoped it would be. But, I don't want to have to change thread after about 10 stitches either. I'm going to put some borders on this, sew it up into a pillow cover and toss it in the wash to see if it holds up.
And here's a little holiday happiness that I saw while out walking the other afternoon. The neighbours down the street have decorated for St. Patrick's Day (while keeping up some Valentine's Day decorations). Cute. 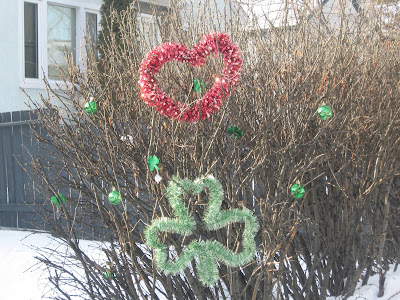 And you know what else is cute? Moda Honeybuns. V and Co. is having a giveaway and you could win! Tell her I sent you.
☺
Happy March, everyone. Can't you just smell Spring in the air? No? Not here, either. But I just know it's coming...
☺
Written by Rachel

I hate dieting. I think if we ate what we want just in smaller portions, that works for me. You can't deprive yourself of some of the good things, because eventually you'll eat more than you normally would anyway! Keep up the good work!
~Karen~

Oh, that skier is cute! You are very talented.

Now Now!! Maybe you lost inches missy!! Hang in there!!! Stay away from the ice cream dinners. Not good!!!! :-)
Love your quilt.

Holy Cow -- it's a good thing we humans don't have three heads -- having to sew three collars on garments might have kept me from sewing clothing LOL!

Staying away from the Cs will help, keep trying.

Sorry I've not been reading all the blogs lately....just been in a frenzy trying to keep up with things. Hmmmmm...maybe your body is rebelling from NOT having the C's and that is why it went UP in weight a bit. (Of course, .5 lbs. is NOT much at all........so I'd not be stressing over it!)

I love the cartoon...so I just need to stock up on croutons...and then I can eat all the ice cream I want!!! Also, I noticed on your sidebar that you're doing the Tisket a Tasket blocks...so I looked yours up...love them...there are so many great ones all over blogland...can't wait for the next block!

inches my dear - check your inches too! next week (and maybe on vegan stylie a little sooner) i'm going all eat-clean on your butts! be ready :)

Oh I bet you have lost something....;-)
That cartoon is a hoot!!
I am behind in all my blog reading plus other things. How did it happen??? Don't know!! Love that skier. I used to love to ski. You have to go herehttp://oneshabbychick.typepad.com/one_shabby_chick/2009/03/getting-real.html and checkout this lil cutie!! She could be related she favors you that much!!