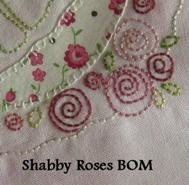 Jenny over at Elephantz has a lovely blog, which I just discovered yesterday through Lola at ...and Sew On. You should go over and visit Jenny because, not only is her blog just beautiful and inspirational, but she also has a gorgeous Block of the Month called Shabby Roses. She has released the first two blocks for us, which you can download (I did ~ click on the picture and you will be taken there). Plus (as if that wasn't enough), Jenny is having a giveaway.
It's not difficult ~ you just have to leave her a comment. So go on... Bousculez... (That's French and I learned it here).
As you know, I have not been terribly productive in the sewing department lately. I should clarify that. I have been somewhat productive in the sewing department, but not at all in the quilting department. Besides my two April BOMs, nothing... rien... has been done on any of the quilts I was supposed to be working on. In fact, since I finished the Let it Snow test block with the appliqued skier, that poor quilt-in-progress has languished on a shelf in my sewing room. It's tragic, I know, but I will get back to it at some point.
.
On the upside (and there is usually one), I finished my fancy-schmancy Spring Skirt. Have a look below! Here I am posing in my skirt and the new white jacket I bought last weekend. I asked my daughter to take a picture of just the skirt and the shoes, but she got this shot (sans tête, which is just fine since my hair was a disaster!) And feast your eyes on those shoes. They were cheap ~ I bought them at a consignment store and I don't think they've ever been worn!
.

Here's a close-up of the shoes: 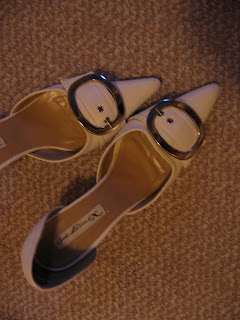 I rarely sew clothes for me (except for Halloween costumes) so this is a real delight. I love red and I think the netting at the bottom of the skirt is a nice couture touch. I saw a lady wearing a skirt with netting like this in Paris and ~ lo and behold ~ I actually had a pattern for one at home! It wasn't a hard pattern, just time consuming.
.
Yes, I am quite pleased with the whole outfit. I will wear it to the grad ceremonies in a couple of weeks.
.
Now to get back to that quilt...
☺
Written by Rachel

Raqchael, I am sure you will be the best dressed at the Graduation. Your outfit is lovely and oh those shoes, I Love Them. Can't wear them anymore but boy years ago I used to dance in 3 in heels. Time does take some things away, but it does give us other percs. Enjoy!

The skirt turned out really nice. The shoes are nice but they would be a big OUCH for me to try to wear them for any longer than 5 minutes!!! LOL

Great skirt! I've been wanting to sew an Amy Butler skirt I picked up a pattern for...just haven't found the right fabric!

You look FAB in it! Awesome. I want to learn how to sew clothes. More for Punkie than for me. Looks like I need to buy myself a pattern and start reading!

Cute skirt....love the net on the bottom! The shoes are adorable, I would put them on a shelf so I could look at them, but could NEVER wear them....ouch!! I can't wear those pointy toed things, sigh......
Blessings~LillySue