I was up waaaay too late last night, sewing more blocks for the Be Yourself quilt.

I only planned to sew for an hour, while watching the latest episode of Parenthood online.

When I went to put my pajamas on, I discovered that AbbyDog had peed on my bed. On the duvet, on the top sheet, on the bottom sheet, onto the mattress cover (but not the mattress itself, thank goodness). And laundry takes a while.

But still, I had some good quality sewing time and worked on blocks with a second background colour. 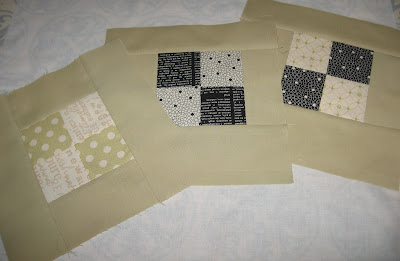 This is Kona Straw. I used it to make the Snowflake Table Runner for my neighbour. I had decided, at one point, not to use this fabric because it wasn't "green" enough, but when I put it next to the blocks, it looked really good.
Now I need to make one last set of blocks (there are 14 of each colour). My original idea was to use black, but I think it might be too harsh against the softer, muted colours. I may find myself at a fabric store in the near future...seeking out the perfect peach-coloured fabric. Peach is not one of my favourite colours, but I think it might work here.
(And if you're wondering about AbbyDog - she also peed on the stairs last night. She's on my blacklist for now. Just kidding - but she isn't allowed anywhere near my bed!)
Off to work now...
Written by Rachel

Looking great Rachel! I like the idea of the black. I know you're not feeling but it just may work. May one block and see.

Ah the joys of having pets. Your blocks look great, I love the Kona Straw, it gives it a nice soft look.

Hope AbbyDog is not sick. Love the soft green. I too like the idea of some black.