Instead of going to the gym this morning, I decided to take DerbyDog for a nice walk in the River Valley. It's only a couple of blocks from our house and it was a beautiful morning, so off we went... 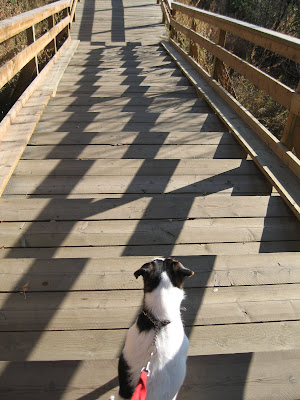 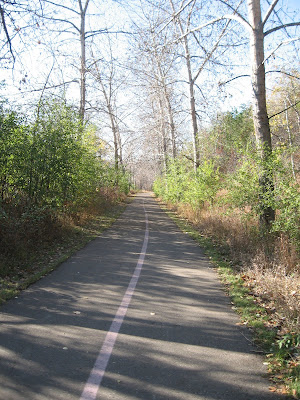 I tried to focus on the small view, like Stacy did, but the only small thing I took notice of was my little pup. 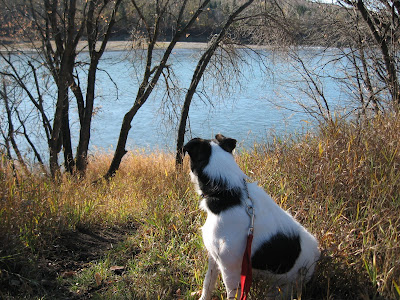 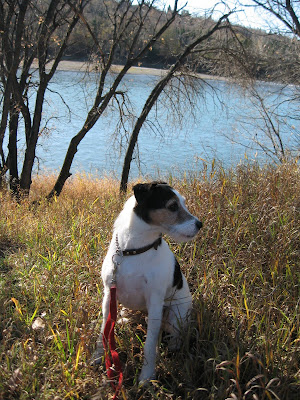 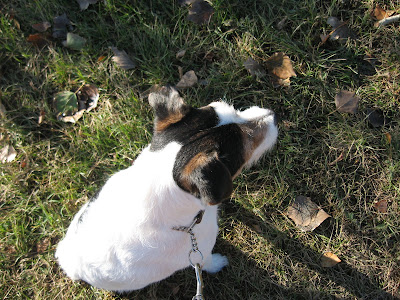 Look at that blue sky! You wouldn't know that two weeks ago, we were covered in snow here. 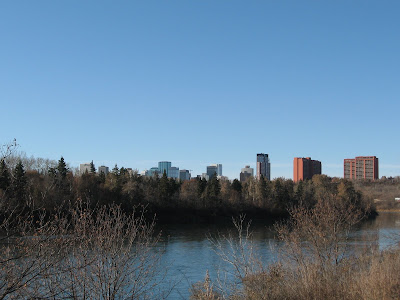 Everybody and their dogs were out walking. Derby doesn't do well with other dogs so the nice, relaxing walk turned into a frustrating experience. Lots of people allow their dogs to go off-leash on the walking paths. I realize that many dogs are well-behaved, gentle creatures. I envy people who have well-behaved, gentle dogs. Derby is not one of those; he's a crazy Jack Russell Terrorist.
.
However, even if you have the best dog in the world, you still have to be sure that he or she will come back when called and will not jump at other animals and people. Some of these people mosey along and their dog is 20 yards in front or behind them. They have no idea where that animal is, nor do they know what's around the next corner.
.
A couple of times, dogs came running at Derby (just trying to be friendly, I'm sure) and he went loco, barking and lunging. The owners weren't quick enough to get their dogs back before the insanity started. They should be paying attention and snap that leash on when they see another dog.
.
After about an hour, I decided to just take Derby home.
. 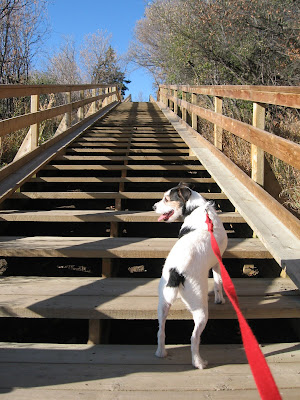 The walk along the streets back to our house was uneventful... we met no other dogs.
.
Now Derby's all tuckered out and is taking a nap on the couch. Me, I'm about to get to work.
.
Some marking... some planning... a learning guide to finish writing and to format. Then the fun stuff... I'll show and tell later.
☺

an eventful morning! great pics. I agree, even if your dog is well behaved that doesn't mean every dog on the trail can deal with your dog. Just keep em leashed. Even as a walker without a dog, I dont want other people's well meaning dogs sniffing or jumping on me for pats even though I like dogs...sometimes you don't feel like it.

Derby is so cute. How nice to take a walk with Derby. What a beautiful place you live in...the skyline is wonderful. Great photos.

Have a nice evening...

Derby is a cutie!! Looks like was a beautiful day for a walk!
We have to keep Sadie on a leash or her nose would take her to Kalamazoo! Ha!! Ha!!
A leash is a safety thing in my opinion.
Keeps our pups safe.
Hope you get to the fun stuff soon.
Lola

Hey Rachel,
I love seeing pictures of Derby :)
Our "Jacks" go crazy also when they see another dog...some people just don't have good manners.
Have a great week.
Warmly,
Deb :)

That is really sad that you had to go home and discontinue your walk because of other people's stupidity!

I love the board walk and the stairs...the path looks beautiful!

What a beautiful walk! Love your dog too.

He looks like such a good boy and he IS handsome. Great photos!

Great morning for a walk. Derby is a cutie! Just the size dog I would want... if we were to get a dog.

Derby is a handsome little fella. Too bad he is a terrorist on a leash! I get mad at people who let their dogs chase the wildlife in parks, since I'm usually there for bird watching and the dogs scare them away. The River Valley looks so pretty ... hard to believe you just had snow a couple week ago (but I do believe you!). Thanks as always for the link. Looking forward to your show and tell.

My JR was the same way! I always had to keep her leashed in case we came up on a dog! He's a cutie!

I know what you mean about dogs who don't do well with other dogs. My Libby, a miniature Schnauzer, is like that. I'm trying to avoid it with the new puppy. He such a gooball and loves everyone people and doggies a like. Looks like you had a wonderful day for walking though.

I've got a pup who is okay around other dogs, but I still don't like it when an unleashed dog comes running up to us when we are out on a walk. I never know what to expect, and only once have I had the other dog's owner apologize for their leaping animal.